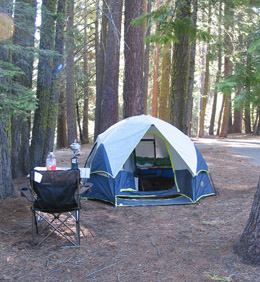 The morning arrived sunny and crisp, with no evidence that bears had been rummaging through the campsite. My tent, chair and table remained intact and unmolested.

I broke camp and packed up the Trooper before going off on a morning hike. My destination was the General Grant Grove, a particularly nice stand of Sequoia, the centerpiece of which is, you guessed it, the General Grant Tree.

Most of the large trees in the area are named for a famous person, a state, or something else of historical or geographical significance. They vary in size from very large to enormous .

The forest floor is actually very open. Although there are well maintained trails in the area, passage would still be easy without them. 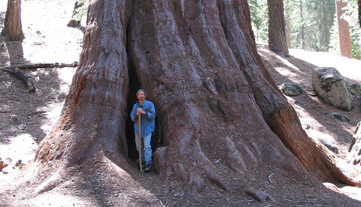 The tree to the left is the Tennessee Tree. It is not the largest in the General Grant Grove, but it happened to be one where there weren't a lot of witnesses to express disapproval of my action of jumping the fence and standing up next to it for a picture.

OK, a little biology - I never really knew the distinction between the Sequoia and the Giant Redwood. I always thought that they were the same. Nope, not true, although they're closely related. The Sequoia live in the dryer mountains, between 6500 and 8000 feet in elevation. The Redwoods live in the coastal forest, where it is damper and warmer. The Sequoia have thicker trunks, the Redwoods get taller. The secret to their large size is simple - they grow fast and live a long time. They are highly impervious to fires near their base (the bark itself can be 4 feet thick) and due to the high level of tannin in their wood, resistant to insects, bacteria and fungi. Not unexpectedly, death usually results from structural failure after the tree has been weakened by lightning strike, wind, erosion or some other trauma.

After my morning hike I headed part way back the way I came in, to the Lodgepole campground. It had been full the day before, but the weekenders were gone and there was plenty of space. 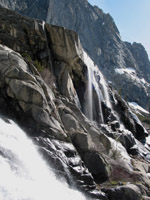 This campsite was on the banks of the Kaweah Rriver, whereas the prevous night's accommodations were at the top of a ridge. I set up camp, then headed out for an afternoon hike up the river trail a few miles to the Tokopah Waterfalls. The falls cascaded about 600 to 800 feet down a granite gorge, fed by the melting snows in the mountains above. There was no one else in the area, except for the feathered and furred local residents. I climbed over the rocks, just soaking in the roar of the water and letting the spray and mist cool me after my uphill trek. I could have stayed there for hours. 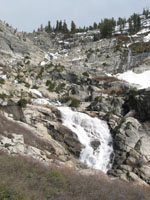 One fellow I came across was this marmot, who seemed more curious about me than frightened. I got within 4 feet of him before he bolted down into his burrow, but he came out again quickly, even though I was even closer, to check out the funny clicking noises I made in an attempt to attract his attention. 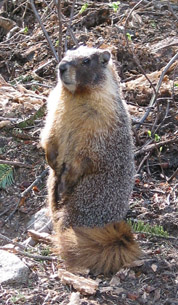 After this hike, I went back to camp and chatted with a few people, including some tourists from Holland. There were a lot of Europeans throughout the park. 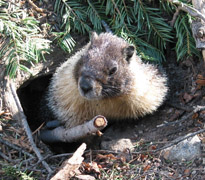 The evening was not quite as cold as the previous evening, but being so close to the river, there was more dampness to content with.

I've taken to giving my website address to people I meet. It will be interesting to see how many of them I hear from later.