This morning Bob went off salmon fishing. He did invite me along, but at the cost of about $100, added to the fact that I had already had more fishing experiences on this trip than I had had in my entire previous life, I opted to spend the day doing something else. I wasn't quite sure what, but looking at the various and sundry maps I have, I noticed that there was the Gerald Ford Museum in Grand Rapids. So, I thought, this might be something a little different - so off I went. A little history lesson never hurts, even if it's a refresher on times I've lived through.

As it turns out, Grand Rapids is one of those cities where there is a lot of construction being done downtown - or maybe the construction was started but put on hold for some reason (like lack of funds). One consequence of this is that there were precious few street signs in the downtown, so once you started to wander around there it got to the point where it was anyone's guess where you were, or where the place you wanted to get to was. It seems to be a town that is struggling somewhat with the economic situation, but there are some lovely old buildings downtown with some great older architecture - you know, the kind that has the type of decorative features that would be impossible to reproduce today (unless you're Bill Gates building a little vacation palace somewh

After asking directions about three times, I finally got to the museum. It's a new building, Lots of space, nicely laid out, and the exhibition flows nicely it terms of giving you a history of the life and career of this particular president. 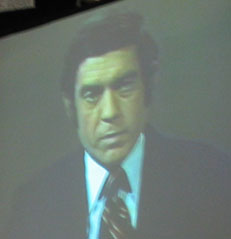 The first room I entered was devoted to the Watergate era. It did not gloss over the events - there were running video clips of the news features at the time, and what seemed to me to be a historically accurate portrayal of events (you will recall that I got to watch most of the hearings on TV since I was working the 3-11 shift at the steel mill at the time). There was a veritable rogue's gallery of the principals involved. Just for humor's sake, here's a picture of what Dan Rather looked like in 1974. Sideburns were very popular back then. Are any of you out there so young you don't remember Watergate? If you don't remember it, read up on it. It's important. 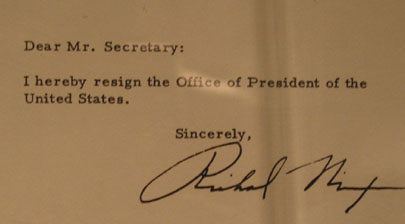 I know some of you out there would be interested in this - they have Nixon's resignation letter on display there (I imagine that it is a reproduction, or one of several copies executed). Clicking on this picture will get you an image of the entire page. I was struck by how terse the letter was - one of the most significant events in the political history of this country was brought about by these 15 words, compared with most things that seem to require volumes of written material.