There is a saying about software design and development:

"All software projects go quickly to 90% completion and remain there forever."

This particular law also seemed to apply to my efforts to actually get underway with my trip. After a seemingly interminable series of repairs and tweaks to the trooper (which afforded me the opportunity to learn a goodly portion of the Valley bus system), repeated trips to put as much of my material possestions in storage as possible (10 ft X 15 ft, stuffed to the gills), and a bewildering list of administrivia to be attended to (seems there's a lot of paperwork involved in being unemployed) I finally got things well enough in order to actually blast off from the Valley of the Sun on Friday afternoon. 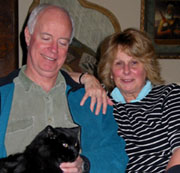 First leg, Scottsdale to Flagstaff, to spend the evening and following morning with Pat and Paul Nicholls, transplanted New Zealanders and former Scottsdale neighbors of mine, and of course Cabot, their cat. Years ago they fled the Sonoran heat for higher altitudes and cooler weather. Paul is a pilot for America West, having formerly flown P-3's (anti-submarine aircraft) for the New Zealand Air Force, now flying Airbus 319's and 320's.

They have a lovely house with a living room window that perfectly frames a view of the San Francisco peaks, and about 10 minutes from Snowbowl, where pat would love to spend all her time, if there was any snow.

Pat treated us to a wonderful dinner of roast duck over a bed of pasta. As the former owner of the Down Under Restaurant in Flagstaff, she knows a thing or two about food. I think the fact that Paul spends time away as a pilot is the only thing that saves him from morbid obesity, since the quality of Pat's food certianly induces one to eat.

We had a good time catching up and some good laughs about me being unemployed and homeless. As exhaustion finally kicked in, they, as always, graciously put me up for the night.