Canton Georgia to Chapel Hill North Carolina was a relatively easy drive, mostly interstates, and I traversed the distance in less than four hours, including rest stops. This was quite relaxing in comparison to some of the ten and eleven hour driving days I had put in previously.

Chapel Hill is, like Lawrence, Kansas, a colorful collection of "liberal" intellectual thoughts and actions that have cropped up in the midst of an otherwise uniformly politically and religiously conservative landscape, kind of like that clump of dandelions on your putting green. It seems whenever you let a university or some other institution of higher education establish itself in your otherwise proper conservative, faithful right-thinking community, it attracts subversive elements, dangerous ideas, body piercing, skateboards and suspect gender interactions. The rest of the state refers to the area as "The People's Republic of Chapel Hill". When there was talk of building a zoo in the Raleigh-Durham area, Jesse Helms suggested that they just put a fence around Chapel Hill. 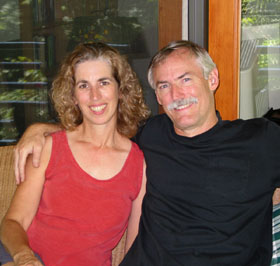 Chapel Hill is the home of Roy and Jan Smith. Roy is yet anoher old Theta Chi from Lehigh University, a few classes ahead of me, and another former room-mate of Gene Mater. I had not spoken to Roy for almost 25 years - we both once worked in the environmental quality department of Bethlehem Steel, but when I left that job and moved to Washington DC in the late 70's we lost touch. Then, whilst I was out and about traveling, I got an email from him - I guess Gene sent him my web page address.

Roy works for EPA in Research Triangle Park, he's involved somehow in water quality policy I believe (Forgive me Roy, if I forgot the details or what you told me). Jan, like me, has been affected by current economic conditions, and also like me, seems to be making the best of it. They have a daughter, 18, who was actually out of town at the time, I believe working as a camp counselor at a camp up near Reading, PA.

Roy and Jan are also some of those people that are still married after twenty-some years, and who seem to actually like each other. Congratulations, you two.