The USS Kearsarge (LHD-3) is a Wasp class amphibious assault ship, of which there are currently seven in the US Navy. She is 844 feet long, displaces a little of 40,000 tons loaded, has a crew of over 1100 seamen and officers, and transports a detachment of almost 1900 marines along with their tanks, trucks, artillery, APC's, landing craft and hovercraft. She also carries almost 50 helicopters and up to 5 AV-8B Harriers. (Follow links at the beginning of this paragraph for more details).

MONDAY AM - Lieutenant Pete left me directions to the naval base. I didn't follow him there when he went in the morning, because in traditional naval fashion he started his day at an absurdly early hour. He very patiently waited for me to get my lazy civilian butt out of the sack and over to Norfolk, and made arrangements for Ensign Nick to meet me and escort me onto the base. This was amazingly easy. The marines at the gate checked his ID, but not mine, in spite of my slightly seedy appearance. I guess they thought that if I was with him, I was OK. 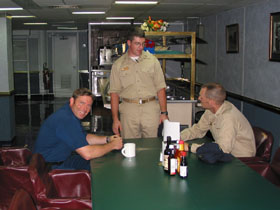 Here's Pete (seated left) Nick (standing) and a gentleman whose name I do not remember, but if I remember correctly, was either commander of the air wing, or one of the air wing senior officers. Pete was CDO (Command Duty Officer) that day which means her was the captain's representative and basically in charge of the ship. In spite of this, he (and Nick) gave me quite an extensive tour. 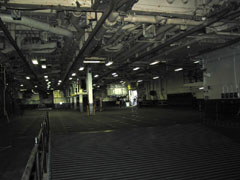 The first thing I saw coming onto the ship was one of the cavernous decks that lie below the flight deck. There's a couple, and their linked together by ramps, kind of like that ramps at a multi-level parking lot - except these ramps are big enough for tanks. 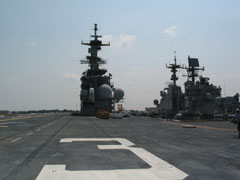 The flight deck looks much like that of a conventional carrier, although this ship only handles, as Pete put it, "things that hover". There is no catapult for launching fixed-wing aircraft, and no arresting mechanism for catching a landing plane. However, I bet I could get a Cessna or a Kitana on and off this thing without too much problem. 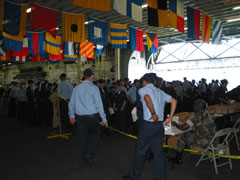 OK, former Motorolans, you should all be able to relate to this - the day I got there, the entire crew was being subjected to a drug screening. If you think our pseudo-random tests (that came very third anniversary like clockwork) were a pain, how would you like to stand in line with 1000 other people to take the pee test? Everyone got tested from the captain on down (I don't think he had to stand in line, though).

As you think about the complexity of a ship this size - the operations, the systems, the maintenance, the weapons, the aircraft - keep in mind the fact that most of the enlisted crew is young- many of them only 19. The officers, chiefs and career enlisted are often older and more seasoned, but to someone like me, at the age of 50, it seems like the whole thing is being run by high-school students. Regardless, it seems to run pretty well.