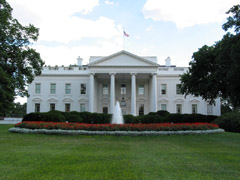 I slept in for a while this morning, then rode the Metro across DC into Virginia to have lunch with Jim. After that, I took a walk around Alexandria and then back into downtown DC. 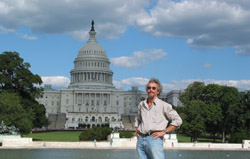 Believe it or not, these are old haunts of mine, from times that were not too different from now - we as a country were dealing with hostile elements in the Islamic world who wanted nothing less than the total destruction of America. Back then, they stormed our embassy in Tehran and took the embassy staff hostage for 444 days. You know what they did this time.

You've all seen these places before, and I used to spend just about every weekend on the mall - but it's been a long, long time, and I really enjoyed the reminiscing and reflection on what has happened between then and now, and from now to when-ever.

I used to live and work here. I came in during the Carter administration, and stayed through the entire Iranian hostage situation. I worked as a contractor for various military and government agencies. I was picked (along with other co-workers) to go to Arlington Cemetery for the memorial service for the servicemen lost in the failed rescue attempt. Also in attendance were President Carter, much of the Supreme Court, about half of the cabinet, and most of the senior members of the House and Senate (needless to say, we were surrounded by a considerable contingent of marines). I went to Reagan's first inauguration. I was sent out to Andrews Air Force Base to greet the hostages when they finally came home, with the roads along the way awash in yellow ribbons. I was working in a Navy office when Reagan was shot. I had friends in, uh, strange places who told me strange things.

For someone who just designed and wrote software, I got to see an awful lot. The more you see, the more you know and the more you find out how things really work, the more you realize how much there is to both admire and despise in the reality of what happens in the process of trying to run the country (and the world for that matter). But that subject could be a whole book in itself. 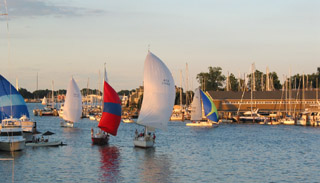 Returning to Annapolis, Jim, Leslie and I went down to the waterfront for dinner (blue crabs, of course). Every Wednesday night in the summer they hold a little regatta in the harbor. On our way in, we were treated to this colorful canvas ballet as the boats finished up their run for the night.

Later in the evening we walked along the waterfront. In one of the parks the US Coast Guard band was performing, so we stopped and enjoyed the music for a while. 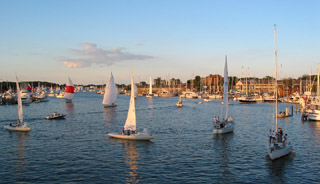 The band music was of a patriotic nature. It is so easy to get swept up in this patriotic ferver, to cheer in response to the tough talk delivered by our leaders, to feel pride in the strength of our country, to feel righteous in our prosecution of the war against those who have attacked us.

BUT - it is also our patriotic duty to consider with a dilligent, critical eye each new action, each military initiative, and each escalation that is proposed. We may decide that our leaders are taking us down a path that is, indeed, the correct and necessary direction for the country. Or it may not be. Now is the time, more than ever, to be really sure we approve of what our leaders are doing, so that when push comes to shove and things get really ugly (which they will), we can grant our unequivocal support what they are doing.

Those of us who are turning 50 this year know all to well what it means when that is not the case.