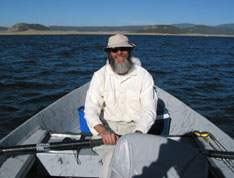 Joel has a very nice boat - oar-powered, no motor - so we trailered it up into the mountains, past Breckenridge, across a mountain pass over 11,500 feet high, to the Antero Reservoir on the South Platte River. The reservoir itself is at 9000 feet, about the same as the town of Frisco. The day was sunny, and the temperature pleasant, even at this altitude. 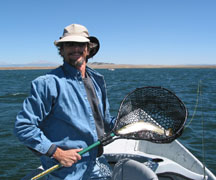 The fishing here was somewhat more of a challenge, the bites less frequent. Also, the winds had whipped up, with gusts over 20 mph. This made for a rocky boat ride and challenging casting conditions.

Joel caught maybe 6 fish that day on maybe 15 or 20 bites (the fish frequently spit out the hook, or otherwise make their escape, before you actually reel them in). I had maybe 6 bites, and only landed one. However, my one fish was the biggest one of the day. As with the previous day, we were using flies with barb-less hooks, any everyone went back into the water. 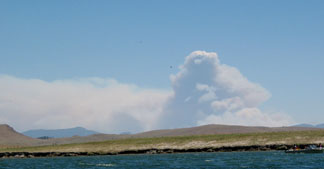 We were on the lake from about 7:30 AM until almost noon. Things were going along very nicely, the air warm enough in spite of the wind, the sun bright. Then I looked over my shoulder ...

These are not storm clouds. Having seen this sort of thing in the past (years ago, not too far from where I lived) I could tell right away it was a very large fire. Fortunately, the wind, although strong (over 20 mph with higher gusts) was blowing the fire in the other direction. 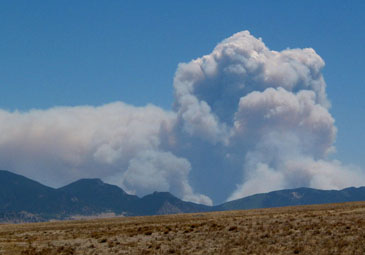 Today, as I write this, it has burned over 60,000 acres in the last 24 hours and is no where near control. The high winds in the area are making fire management just about impossible. As we watched, we could see new plumes developing and quickly rising to over 20,000 feet. The fire was just exploding. From about the time the fire started, through the night, the fire was consuming over 500 acres an hour. This is one of four large fires in the state right now. They are all easily visible from space.

Fortunately there were no fires between Antero and Frisco, so we had no trouble getting home. However, one of the other large fires is just east of Rifle, CO, that I had passed through just two days before, and the highway there was closed.

When we got home, Amy had arrived. We relaxed for a while, watched the smoke on the horizon, then I took them out for Mexican food.