Joel is an avid fisherman. Before he started his current technology training business, he worked as a fly fishing guide, ski instructor, rafting trip leader, and geology instructor in the local community college. Prior to that, he was an exploration geologist with Exxon - of course, that was an entirely different lifetime.

So, if you are spending any time with Joel, You Will Fish. 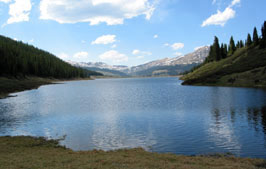 After a lazy, restful morning, Joel wanted to take me fly-fishing. So, we packed up his fly-rod, a bunch of the flies that he tied himself, and headed up to the Clinton Reservoir. This time of year, the cut-throat trout are spawning. The stream feeding the reservoir is filled with these fish. They're all energetic and feisty, totally exited with hormonal imperatives, and ready to strike. Add to this the fact that now is the season for the hatching of the various insects that make up a major portion of their diet, and it makes for good fishing.

I got quite an education from Joel about fly fishing. There is a great deal of science involved in order to be a really successful fly-fisherman. You have to know not only the life cycle and dietary preferences of the trout, but also the life cycle and physical characteristics of the insects that the fish feed on. When you tie a fly, you are actually trying to emulate an insect that your intended target perceives as particularly appealing. A subtle difference in color, or a size variation in millimeters can make the difference on whether or not the fish will find the lure interesting.

Then, after you master the biology, there's the physics lessons involved in casting with fly tackle. I'm not even going to begin to go into that here. But, Joel gave me a few quick lessons, and I must say I picked it up fairly well. 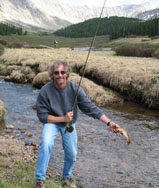 We parked the car, hiked the mile or so up to the stream, and went at it. According to Joel, the conditions were very unusual. We were catching a fish about every three minutes, and this went on for about 2 hours. The flies we were using had very small barb-less hooks, and we were practicing catch and release (a very common practice, I'm glad to see). 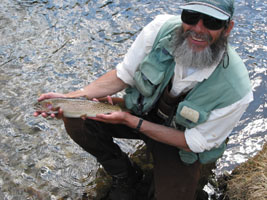 What we were catching are called cut-throat trout. They are called that because of the bright red gash-like colorations on their throats. Also, this being breeding season, the colors of the fish in general were enhanced.

The fish seemed to suffer no great physical trauma from their experience of being temporarily yanked out of their element, unhooked, maybe photographed, and then released after a feeding experience that didn't turn out to be quite what they expected. Some of them still had hooks from such a previous experience (I seem to remember reading somewhere that fish have a memory span of 3 seconds). According to Joel, the hooks either eventually fall out or rust away, so they don't remain permanently with the fish.