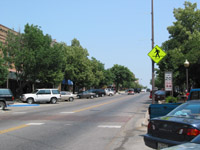 OK, Now it's time to tell you about Lawrence. Lawrence is not really part of Kansas.

Thank God (if you choose to believe in one, or several, or whatever ...).

The rest of Kansas is - well, Kansas. Not to come down on it, I'm really not. The conservative element is still there. This is the state, after all, that was still trying to legislate that "creation science" be promoted along with (and more vigorously than) the "theory" of evolution in all science textbooks used in the school, even within this 21st century (no wonder this country lags behind others in science literacy). There is no shortage of fundamentalist religious radio stations, and I would assume the requisite audience that keeps them in business. Regardless, the natives are genuinely friendly. But, I think I would grow quickly (as measured in nanoseconds) restless if I was stuck there.

So - I submit for your consideration the proposal that Kansas is a lot like - actually is - the first part of Wiz of Oz - rural, agricultural, provincial, mind-numbingly wholesome, and generally rendered in black and white (OK, maybe sepia tones). Lawrence is really Munchkinland located within the rest of Kansas. Picture Lawrence as colorful, celebratory (the town actually jumps on a Saturday night), filled with food and drink and shops full of frivolous diversions, host to the occasional displaced Kansan being dropped in and somewhat astonished at what she or he sees, the venue of an occasional controversial political statement, such as dropping a house on an unpopular local figure.

OK, it's a stretch - but no more than "Oh Brother, Where Art Thou" being based on Homer's Odyssey.

But I've got a balloon scheduled to take me out of here Tuesday.