Today was another slow, restful day, although I did get a little activity in. I went into Orofino again, stopped to see Barb briefly, delivered a box of nails to Frank at his construction site, then went down to the fish hatchery in Ahsahka (right next to Orofino) and looked around. The hatchery season ws pretty much over, so there wasn't a lot to see, but it was interesting anyway. There are many acres of concrete tanks where they raise Steelhead, Rainbow Trout and Chinook Salmon.

Since the dams on the rivers have interfered with the natural migration of the fish, a number of hatcheries have been built to restore the fish populations (quite successfully, too). The adult fish migrating upstream are captured and harvested. Since they were spawned at the hatchery, they return there. The eggs and sperm are extracted, and millions of fry are produced. These are fed and raised in the hatchery until they reach smolt stage, at which time they are ready to begin their migration to the ocean. They are then either released from the hatchery, or trucked in huge tanks to other rivers and released there. Those that are released in other rivers go back to those rivers as adults.

Afterwards I drove up to the dam. On the river below I watched osprey flying back and forth, looking for fish. It was interesting seeing them fly along with a fish clutched to their belly like the torpedo on a WWII navel bomber.

In the afternoon I mowed Frank and Barb's lawn for them (isn't that fascinating?) It got really interesting since a lot of their property is on a 30 degree bank.

In the evening I decided to go into town for a beer to check out the local watering holes. They were about what you expected - lots of pool tables, lots of stuffed heads and fish on the walls, lots of flannel shirts and suspenders. I didn't stay too long - I sat down and was immediately befriended by a somewhat inebriated fellow who insisted on spending about half an hour relating the details of every punch of every boxing match he ever saw on TV (and I though MY mind was full of useless trivia). He had kind of a wild look in his eyes, so I was as pleasant and polite as possible. I eventually escaped, using the excuse that I had to get up early to go fishing in the morning (which was actually true). 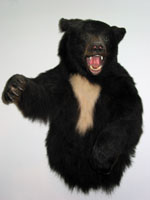 It seems everyone here hunts bear, and it doesn't seem to have affected the bear population too much. Frank got a few in years past. He used a rifle. Lots of people use a bow. Now, this has gotten too tame for some people, and they want Fish and Game to issue licences to hunt with - get this - spears. Now, this seems very sporting to me, although a little more personal than I would care to get, even if I hunted. It also seems that you'd want to practice your technique real well before going out on the hunt, since the consequences of not getting it right the first time could be quite unpleasant (don't try this at home, folks).