Dave and Marie both had Friday off, so we could all get out together for some sight-seeing. After a leisurely and nourishing breakfast and a relaxing morning, they took me to Watkins Glen State Park.

I have been to the town of Watkins Glen twice before. The first time was for the Watkins Glen Rock Festival, held back in, if memory serves me correctly, 1971, featuring three days of performances by the Grateful Dead, the Band, and a few other groups that I can't recall,. This lapse of memory is due strictly to the passage of time (hard to believe it's been over 30 years) and has nothing to do with my mental state at the time.

Why are you smirking? No, really! I mean it. Aw, com'on! - Aaah, what's the use - no one believes that even if it is the truth.

The second time I was at Watkins Glen was a year or two later. A friend of mine (Mike, as a matter of fact - see 6/15 entry) did freelance video work and at the last minute needed someone to run sound equipment for an assignment, which happened to be filming Jackie Stewart and the Watkins Glen Grand Prix. That was cool, we had pit passes, press credentials, etc. Tragically, Stewart's team mate was killed in practice runs the day after we arrived, so Stewart withdrew from the race.

Anyway - these are historical diversions which maybe don't have any real point in this journal, other than reminiscences that came across to me while I was here. Neither previous visit got me to the gorge - in fact, I knew nothing about it until Dave and Marie took me there.

We entered the park on the high ground above - unless you know what is here, you might never think to even enter the park. There is an unpretentious little picnic area, trees, parking, the usual - and then there's a stone staircase that descends from one end of the area. 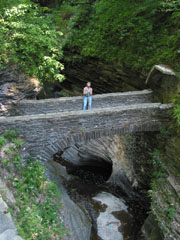 Walking down the staircase, in a few minutes you find yourself deep in a water-carved gorge. The light entering from above is filtered through the canopy of trees lining the rim, shifting and dancing across the rock as breezes tease the branches back and forth. Seeps, trickles and streams of water drip, sprinkle and splatter down the sides of the chasm between beds of ferns and mats of moss clinging to the walls. The river below moves quietly in places and rushes in others, stringing together a chain of deep, clear pools carved intricately into the rock. The shale and sandstone intermix and alternate layers, one giving way to another here and there. Each type of stone has its own unique nature of decay and pattern of erosion, the result being a fluted, sculpted passage that has been coaxed out of the rock by the tireless passage of water since the last Ice Age.

The stone path along the way is well maintained and easily traversed. The walkways are clear, with low parapet walls along steep drop-offs, and enchanting bridges crossing the gorge, weaving the trail from one side to the other as you continue your descent. Although the paths and bridges were actually built in this century, their appearance and manner of construction gives then an aura of ancientness that easily brings surreal shades of fantasy to your thoughts as you walk along.