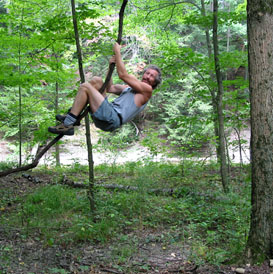 Before heading on today, Uncle Hal and I took a little morning hike down a network of trails in a local nature preserve. It reminded me a lot of places I used to play when I was young. I took the opportunity to monkey around a bit. Personally, I'm glad that our particular species of hominids decided to descend from the trees and live on the ground. This climbing-up-and-down-vines stuff is actually hard work.

Departing the Erie area, I headed north along the shores of Lake Erie in the direction of Buffalo, then east again towards the Finger Lakes region of upstate New York.

Along the way, I passed through the town of Warsaw. This is the town in which I was born. I had not been there since I was about 6 weeks old. I did not have the time to stop, but planned to stop there on the way back.

Along Lake Erie, I was greeted again by a surprising fact about the state of Pennsylvania, unexpected to me even though I grew up in this state - northwest PA is, believe it or not, wine country. I passed through miles of vinyards as I moved across the "chimney" at the top of the state.

When I first started out, I got a little confused - my destination was Aurora, but there is an "East Aurora" on the map, just outside Buffalo. I quickly figured out that my actual destination was someplace else - an additional two or three hours to the east, but thankfully a goodly distance from Buffalo. I have no idea why East Aurora was 150 miles to the west of Aurora. Perhaps these places were explored, settled and mapped out by early settlers in the 18th century who got well into the apple-jack before sitting down for an evening of map making, and for one reason or another, their inverted cartography became the standard regardless. Sounds kind of like the way certain technology standards have been established today.

Anyway - I got to Dave and Marie Eckhardt's place safe and sound, and Marie had a nice pasta dinner waiting for me.