It rained over the evening, but the morning dawned clear and by the time I was done with my morning hike everything had dried out nicely. I took down the tent, packed up and continued west on route 6 towards Erie.

Route 6 winds through the hills and mountains of northwestern Pennsylvania. There are numerous small towns - old towns, going back to the 19th century when the area boomed with an economy based on farming, coal mining and timber. Many towns have numerous large Victorian era houses built before the turn of the century. Many of them are well maintained and quite attractive (I didn't take pictures - you've seen enough of those).

The amazing thing is the low price of these homes - many can be had for not much over $100,000. I was amazed - but before you all go rushing to rural Pennsylvania to buy your dreamhouse for not much more than the cost of a pair of hig-end SUV's, you have to consider where they are. Although the forests, rivers, farms and countryside is beautiful, I MAY BE WRONG, but it appears there is just absolutely nothing to do there (when deer are not in season). Now, if I actually lived there, I may be proven wrong. What may be a little too slow for me may be just what other people are looking for. After about a week, I think I would begin to go a little crazy living here, but that is just my own personal prejudice.

I suppose there's a lot to be said for small town living. No traffic jams comes to mind. But I must admit, if I am going to be totally honest with myself, that I have become somewhat of an urbanized creature. I don't need to live in a big city, but I need to be reasonably close to one. Scottsdale is perfect for in in that sense.

In the evening, I arrived at the home of my uncle and aunt, Hal and Gretchen, where I planned to stay for a few days.

Hal (my mom's brother) is a retired Presbyterian minister. As is the case with many "retired" people, he finds that he is almost as busy in his chosen field as he was back when he was "working". Hal and Gretchen are the parents of my cousin Fred, who I visited earlier in my trip while passing through Ventura, California. 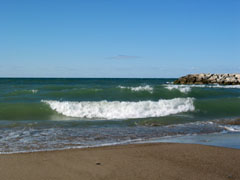 Hal and Gretchen took me out to the shores and harbors of Lake Erie. In times past, Lake Erie had the reputation as one of the more polluted large bodies of water in North America. Environmental controls put in place over the last 30 or so years have made a real difference. Now the beaches are clean, and the lake is full of fish.

The beach to the left is near Misery Bay. This location figures prominently in the War of 1812. Commodore Perry and his crew built a small fleet of ships from scratch, then went on to defeat the British naval forces on the lake. Of course, historical analysis shows that the War of 1812 was one of those totally unnecessary wastes due to failed communications - diplomatic messages to weeks or months to get from one government to another. Today, with modern communications channels, we can commit the same level of waste in almost no time at all. 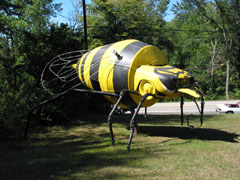 One place near where Hal and Gretchen live has a sort of sculture garden in the front yard. I couldn't resist taking a picture of teh works of art displayed there. I imagine that the people who own this place would be any homeowner association's worst nightmare.

Over the few days I stayed in Erie, Gretchen made sure that I ate very, very well, and I managed to get a good workout at the fitness center to which they belong.