Sherwood's Reuter's article about me came out yesterday - my site went from an average of 30 visitors a day (mostly friends and family) to over 1800! I'm sure a bunch of them are one-time hits, but I've received about 200 emails - thanks, everybody.

After visiting the town of my birth the day before, and spending the evening in a motel in Niagara Falls NY, I made the decision to cut across Ontario on my way west, instead of traveling back down the shores of Lake Erie through Pennsylvania again into Ohio. 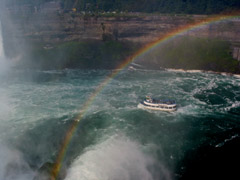 From the American side, you best approach the falls along a trail on Goat Island. Long before you come to the falls, the rolling sound comes to your ears - a thrumming white noise rendered in deep bass tones that portend something gigantic hidden around the bend. You follow the path along the river, whose waters transition from a slow tranquil flow, to worried rapids, to a frantic rush that vanish over a kind of event horizon, falling out of existence over the edge of the world. Before you get to the precipice a great white mist rises and engulfs you and dampens you even in the brightest of sun. Then finally, you come past the edge, looking down at a massive curtain dropping over 170 feet, exploding into foam below.

Niagara Falls is probably one of the most photographed features in North America. Unfortunately the day I was there it was hazy, so the photographic parameters were not optimal. From the Canadian side, you have less direct access to the edge of the falls, but you get a greater panoramic view.

After spending time on the American side, I drove over Rainbow Bridge (seems I recall a Jimmy Hendrix production by that name) into Ontario. Well, eventually into Ontario, after spending some quality time with the Canadian Customs and Immigration Ministry...