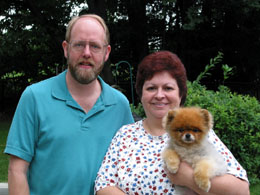 OK, time to move on once again. I'm glad to see Bob and Maggie are doing well - at least SOME people out there have been finding work. Anyway, here's a picture of Bob and Maggie with their pet ewok.

I head west as far as one could without driving into Lake Michigan, and then move south down the coast. Although it is still summer in that the trees are still green, I can feel that the annual change is stirring. Maybe it is the gray weather and the cooler temperatures that it brings, maybe it's the shortness of the days - but summer is passing, and for some reason that adds a little urgency to my movements. 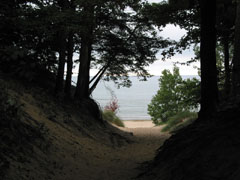 I stop along the shores of Lake Michigan at a state park. There is about a half mile walk through the woods to the water. There are a few people on the beach, but no one is swimming. 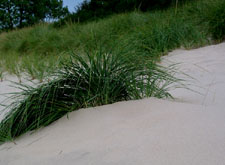 The trees are a mixture of pine and hardwoods. The forest goes to within about 40 yards of the water, where it gives way to a wide, white sandy beach. In some places there are dunes, with shrubs and grasses growing from them. There is a light surf, but today at least somewhat less than the surf I saw on Lake Erie.

So much water - but so little water. Here's some facts I picked up - actually, it was on an MPR broadcast.

Of all the water in the world, 97% is salt water, only 3% is fresh water. Of the fresh water 2/3rds are tied up in the polar caps and glaciers, leaving only 1% of the world's total water supply as being available for use from lakes and rivers. Of this remaining 1%, one fifth is in the Great Lakes.

After visiting the lake, I move on down the road, cut briefly through northern Indiana, through the city of Chicago, into the suburbs, and eventually to Barrington, the home of Bob and Betty Bruns, good friends and former neighbors.