This day I wanted to devote to an extended hike through the grasslands, across the hills, to the edge of the badlands to the east.

This area is truly a wilderness - there are no marked trails, no man-made points of reference. One set of hills looked pretty much like any other. From what I had seen so far, it was obvious that once I traveled over one or two sets of hills, it would be very easy to lose my way. It would be pretty much like trying to find waypoints on a rolling sea.

Being a pilot and familiar with various methods of navigation, I knew I could solve this problem accurately enough to find my way back with the use of my watch and a compass. The technique is relatively simple. Instead of meandering aimlessly over hill and dale, I would break the hike into segments. For each segment, I would be careful to move in as much a straight line as possible on a specific compass heading. I could keep on the heading by always moving from one visible destination to another that lay on the selected heading. For each segment, I would record the compass heading and the amount of time I spent walking on that heading. Then, for the return trip, I would invert the headings 180 degrees and walk the same amount of time as I had on the outbound leg. There would be some deviation due to varying walking speeds, but it would be good enough to get me back in the general area of where I started.

Off I went, starting about 10:30 in the morning, my initial direction due East. I lost sight of the camp in about 10 minutes.

At first, there was a river off to my left. As I went over a hill, it disappeared. I came upon a prairie dog colony about a quarter mile across. The dogs barked incessantly, scolding me and warning their neighbors as I walked through. These critters were less complacent than the ones I had seen and photographed the previous day. As soon as I came into view, they scampered from their foraging to their burrows, popping down out of sight as I approached within about a hundred feet. 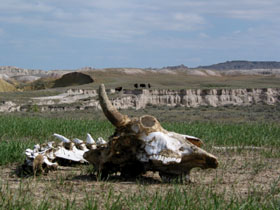 While walking, there were bison in sight as often as not. No big herds, but solitary animals of groups of two or three. I did not approach them, but passed them by, sometimes less than a hundred feet away. They watched me, but showed no real concern with my presence.

At one point I flushed three coyotes out of a clump of junipers. They bolted up onto the ridgeline, nervously watcing me as I walked along. I spotted them periodically keeping track of my location.

As I came over one hill I surprised a mule deer down in a gully. He bounded of with that particular bounding motion - like he was spring-loaded - not running, but bouncing along simultaneously on all four legs - boing ... boing ... boing ...

I continued on, changing my heading about seven times, recording the direction and time for each one. After about 3 1/2 hours the grassland began to fade into less hospitable terrain - I had reached my destination, the edge of the badlands terrain.