When I reached this point, I had been walking for about 3 1/2 hours. Figuring on stops for local exploring and photography on the way, I was somewhere between 6 and 7 miles out. It was getting to be mid-afternoon, and although I could have gone further, I wanted to get back with enough daylight time to cook dinner and settle in for the evening.

I followed my navigation plan, reversing the direction and sequence of the headings that I had come out on, and timed each return segment accordingly. It did not bring me back by the exact same path, but close enough that it landed me within sight of the campground. 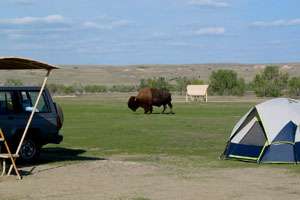 Oh give me a home ... where the buffalo roam ...
Back at the camp, a bison or two was liesurely grazing about, paying little head to the handfull of people, tents and RV's. My tent and supplies were totally intact. The bison seem to like to rub up against things as if to scratch an itch (probably exactly what they're doing) but evidently they've already figured out that tents are not very good for this purpose, as mine was still standing.

I had a nice big high-calory dinner and downloaded the camera images onto my computer. Although the temperature had been very pleasant all day, as soon as the sun went over the horizon, the air chilled quickly. I retreated to my tent for some reading as dusk dimmed the sky.

A little before total darkness, a distant deep booming and rumbling rolled over everything, and under everything - you could feel it in the ground. I stepped out of my tent, looked of to the southwest, and observed a very large, ominous anvil-shaped thunderhead growing. It was sooty black on one side, shifting to grey and then a glowing read on the other side where the already-set sun still threw light on its elevated structure. Flashes of lightning shot under, around and through it on an almost continuous basis. It was not all that far away, and seemed to be getting closer.

I wondered if it would be wise to plan on sleeping in the Trooper, but decided to wait it out. I decided that the proximity of lightning strikes would be the deciding factor. The campsite was in an area lower than the surrounding hills, so I wasn't too worried about getting hit. As the storm approached the wind picked up - my tent began to flap and shake incessantly, but not violently enough to cause concern about a collapse.

The storm came over. I as lay on my cot reading, the raindrops came - big, corpulent noisy drops that each made a loud SPLAT like a rotten grape hurled onto the rain fly of my tent. The lightning lit up the outside, flashing through my tent like daylight, but none of the bolts seemed to be coming down very close.

The rain lasted about half an hour, and the main mass of the storm seemed to have passed to the south. The rain let up, but not the wind. I slept about 3 hours, then the wind and tent-flapping woke me - I could sleep no more, so I just read a little from time to time and waited for daybreak.