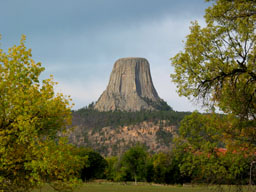 Devil's Tower is one of those things that present infinite opportunities for photographic capture. Due simply to its enormity, there are myriad perspectives and angles to explore. Add to that the fact that every moment of the day, as the light tracks from a different direction, directly through a clear blue sky or filtered through cloud patterns ranging from wispy stratospheric strands to charcoal thunderstorms that roil close to the surface, the observer or photographer is treated to kaleidoscopic variations in the spectacle. Then there can be snow, rain, fog ...

Leaving Hulett, I again passed the Tower as I moved south, stopped to take even more pictures, then continued on.

If you drive leisurely through South Dakota and Wyoming, you will see just about everything that you ever expected to find, or fantasized about finding, in the West - even the old West - with the possible exception of attack by hostile indigenous tribes. I certainly was not disappointed by what I found.

From Devil's Tower I moved west to Gillete on I-90, then south on a back road, route 59, through the Thunder Basin National Grassland to Douglas, west again to Casper, then again south on route 220. 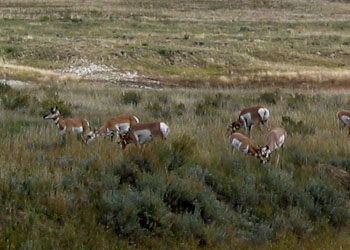 The "back roads" of Wyoming cut through just miles and mile and miles of seemingly empty country, with occasional ranches being the only sign of habitation. The roads are generally very well maintained, and traffic is almost nonexistent. Pronghorn antelope, singly and in herds, became a common site.

The pronghorn were impossible to get close to. At the slightest suggestion of an approach, they would turn tail and begin moving away. Strangely, they are most visible in retreat. Most of there bodies are brown, with black and white markings on their face, and white bellies. Their rumps, however, are large, bright, white target-shaped markings. When they turn away from you and run, you see are big white round shapes bounding across the prairie, but much more visible than from the front or side - it's a marking that says "here I am, I'm running away, come chase me" - I'm not quite sure what the adaptive advantage of this is - except that they are very fast, and maybe predators (mountain lion, and in the past probably wolves) have learned to read this signal as "this thing's too fast, lets not even bother wasting our energy".

As I moved west through Wyoming, the altitude increased slowly but steadily. The landscape became more and more arid. The grasslands gave way to sagebrush. I was slowly creeping up on the Great American Desert, territory I have lived in for 22 years, and became filled with the feeling that I was really on the way home, even though I still had over 1200 miles to go.

The weather was variable. The sun would shine, then slate gray clouds would come in, rain would splatter or sprinkle for a while, sometimes when the sun seemed to be shining.

Southwest of Casper I was crossing territory that had also been crossed by settlers and frontiersmen over 150 years ago. I came across a place called Independence Rock.

The "rock" is the large granite mound on the left edge of this picture. There are various accounts of how the rock got it's name. According to one account, it was named as such because a number of wagon-trains converged here on July 4th, 1841. Regardless of how it got its name, it was a waypoint for the Oregon, California and Mormon trails, and many travelers carved their names in its face to mark their passage.

Except for a small visitor's center and a few trails, the area probably looks pretty much like it did when the settlers came through.

Wyoming is one of those Really Big States (like most of the western states), and getting across it in one day is not practical if you want to stop and see anything. So, I made it as far as Rawlins. Although sun came and went during the day, the evening weather always seemed to be foul, so it was another motel night.