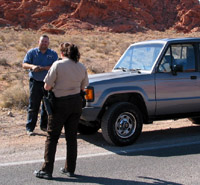 DON'T PANIC - that is NOT a Nevada High Patrol officer in the foreground, it is a park ranger, one of two that helped me out (the other one was younger, blond and very cute, but this is the one that gave me a ride). No matter, the tow truck driver, even though he was LDS and they're not supposed to do that stuff, had been hitting on this lady, which he told me about right after he told me all about going on his church mission to Kentucky. OOPS - Oh God, I've done it now, I've published personal private information on the internet without permission, his bishop will probably see this and his life will be ruined, But I digress...

Before I left on my trip (and one of the reasons it took so long to actually get started) I put considerable time and money into getting the Trooper in as good of a running condition as possible. One of the things I had done was to get a new clutch. Well, it seems just after John and I finished up about 10 minutes of photo opportunities said our farewells, (during which I left the Trooper running to keep the inside air conditioned), I pulled out onto the road, shifted gears about 2 times, then... I could shift all I wanted, but there was this minor problem of the engine not connecting to the transmission- no engagement by the clutch.

The Trooper doesn't move.
John just disappeared over the horizon.
I am out of cell phone range.
I am in the middle of the desert.
It's about 100 degrees.
The lizards look really hungry.

To make a long story short, I get picked up, taken to the park entrance gate, where the cute blond rangerette is very helpful, calls a tow service for me, and arranges for a ride back to the Trooper. Mr Tow Truck Driver shows up (thankfully Ihave towing insurance) and we're off to Overton, Nevada, the closest town, 26 miles away. We get there about 4:45, and drop the Trooper off at an auto shop, where the owner promises to look at it in the morning.

Funny thing, though, once we got it to the shop, and it had cooled off for a while, the clutch started working again. Obviously the problem with the clutch is triggered when it gets warm.

I spent the night in a Best Western motel about a block from the shop. Dinner was at McDonald's, which was the only restaurant open in town. I worked on the website pretty much all night. More about Overton tomorrow.