OK - So I woke up in Overton, Nevada, after a fun-filled evening with my laptop. Overton was the closest town to where I had my problems, and it's near ... well, it's not really near anything. 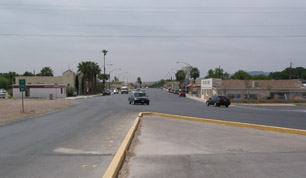 Here's a picture of downtown Overton right in the middle of the morning rush hour.

In the morning, I walked over to the shop from the motel and had a chat with the owner/mechanic. He said that he had already driven it about this morning, and that it was working fine. Amazing what a night of cooling could do. So, I had breakfast (at the one REAL restaurant which was mercifully open) and decided to take my chances getting back to Las Vegas. I hit the road, and as expected, did OK until the Trooper started to get warm.

I found that if I kept moving fast enough, the air cooled things so that they worked, more or less. When it was cool, more when it was hot, less. I did make it back to Las Vegas OK, and after not being able to reach most of my friends, I bit the bullet and went looking for a shop. After about 3 stops (and a chain of referrals) I found one, pertty much on the other side of town, that sounded good and reputable.

By this time it was late afternoon, it was hot, traffic was heavy, I was stuck standing (and heating) at about every light, the clutch was slipping like crazy, and I was really concerned that it would drop into no-go-mode right in the middle of the busiest intersection on the Las Vegas Strip.

I got lucky, and limped Mr Trooper into the shop without causing any major traffic incidents (thereby missing my opportunity to be on the evening TV traffic report). The mechanic locked it up in his garage, and gave me a ride to the Orleans, which is where I am right now, writing this.

Oh well, the room rates here are reasonable, and I had a prime rib dinner for $ 7.95.

Maybe later I'll go play some slots to see if I can win some clutch money.