MONDAY - Mike is off to work. He manages software developers for the company he works for (no, I did not solicit him for work, although we had lots of conversations about the state of the tech industry and the impact of the current slump on business and tech people in general). Linsday has studying to do. She is a pediatric ER nurse which involves keeping current on a lot of information in a field where technology is constantly advancing. Hey former fellow techies - sound familiar? The difference is, if we slacked off, nobody got hurt (usually). I run a few errands, work on the web site, and find a gym where I can get a workout.

The kids are totally fascinated by dinosaurs. I thought I knew a lot about them when I was a kid. These kids know lots more. Then again, there is a lot more to be known today, even about creatures that vanished 65 million years ago. The kids brought me up to date, even if Lindsay had to translate from time to time (I don't quite understand what a 2 1/2 year old is saying all the time). The kids like that my name is Carl. Some of their favorite story books are about a dog (looks like a benevelent rotweiler) named Carl. Whenever I leave the house they get a worried look on their faces, wondering where I am going and when I'll be back.

I sometimes think that I am carting around a rediculous amount of technology - computer, digital camera, cell phone, Zip drive, PDA with docking cradle, phone wires, Ethernet cable, USB cables, adapters, AC power supplies, DC to AC inverter for plugging into the car, a stack of software CDs, reference books, even an HP printer. But, as it turns out, I am finding that I am actually using most of this stuff.

I took a number of pictures of Mike, Lindsay and the kids, several of which were very nice. My printer produces hoto-quailty prints on glossy paper. I ran off some of the better pictures I took, nice 8 by 10,s and gave them to Mike and Lindsay as a token of appreciation for the hospitality extended to me. Being able to do that made carrying this extra gear really worth while.

In the afternoon I drove downtown to the harbor and took an excursion cruise. San Diego is a big Navy town, with several bases in the area. VCN 68, better known as the aircraft carrier Nimitz, was in harbor, as well as two SSN 688's, better known as Los Angeles class attack submarines.

I found it amazing that even in today's state of elevated security concerns, we could ride a large cruise boat to within a few hundred yards of several billion dollars worth of military assets. The only thing between us and these ships was a single 12-foot motor launch, with a single person aboard, and a sign on the side saying "Navy Security". The only reason that this made sense to me was the probability that there was, probably hidden in plain sight, formidable firepower that could be immediately directed to any threat that approached. I wouldn't recommend that anyone bring so much as a kayak in too close or too fast. 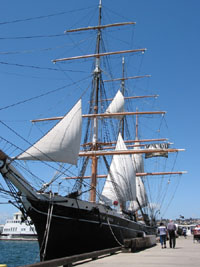 Of course, warships were not the only thing of interest in the harbor. This ship, the Start of India, is an iron-hulled barque built in 1863. She is for the most part a floating museum, but from what I understand, she still goes out to sea.

Along the waterfront, there were a number of homeless people, mostly men, with their soiled bundles, battered rolling suitcases and shopping carts. A few sat on the wharf holding out signs, "homeless and out of work - please help".

I couldn't help but think, how ironic ...

But for the most part, they kept to themselves and did not approach, bother or solicit the more prosperous-looking people walking around.