After leaving Doug, Cheryl and Sarina on Saturday morning, I decided to call another old friend (also named Doug) with whom I hadn't spoken for several years, in spite of the fact that we share a colorful past (involving mostly things having to do with airplanes and parachutes) going all the way back to the 70's.

This Doug and his wife Paula instantly invited me to come stay with them up in Lehighton, PA, which fortunately was to the north, and therefore wouldn't require any more backtracking on my part. 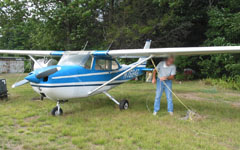 Once I got up to Lehighton, the weather had cleared up nicely. So, the first thing we did after saying "hi" and shaking hands was go out to the Beltsville airport and fire up the Cessna 172.

Now, this is not what most of you think of as an airport. Basically it is a hanger, small office building, a windsock, and a few thousand feet of field that currently just doesn't happen to have corn growing in it. You have to watch for deer.

Doug is a pilot for Spirit Airlines. He also has just about every instructor's rating there is. So, that meant that even though my medical certificate had expired and I was SO not current, we could call this flight instruction and I could fly. 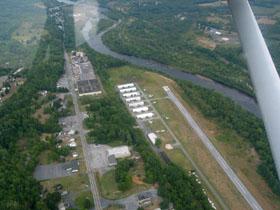 We started out by flying over to Lehighton airport, which has a paved runway, so I could to some takeoffs and landings. It felt really good to get back behind the controls again, but man, was I rusty. In spite of that, we survived having me at the controls, and Doug didn't even have to yell at me once.

After that, we buzzed about, disturbing the local diary herds, avoiding the temptation to dive-bomb a golf course, and visiting a few other airports. Eventually the weather started to move in again and we had to stop playing, go home and put the toys away.

The following day was rainy and just generally miserable, so I took Doug's kids to an afternoon movie. I had been planning on heading out to camp in the middle of the state, but I really in the mood to go set up a camp in the rain. Doug and Paula put up with me for another evening, so I didn't have to.