There are only two roads across the southern tip of Florida, which consists mostly of the enormous wetlands area known as the Everglades. One is a section of I-75 known as "Alligator Alley". The other is US Route 41, which, on the map, looks even less inviting. I wasn't so much worried about large carnivorous reptiles as I was about having another breakdown. Although the Trooper continued to run well (a quick calculation indicated that I was getting at least 20 mpg, so I wasn't dumping fuel) I was still operating under what I would consider a healthy level of paranoia. I just wanted to be somewhere where I could be found quickly if something went wrong.

The Everglades is another place that has always fascinated me. It's unique type of biological and ecological makeup is found nowhere else in the country. Although there are very few places to stop along the way, I did find one place near a part of the swamp known as Big Cypress National Preserve. 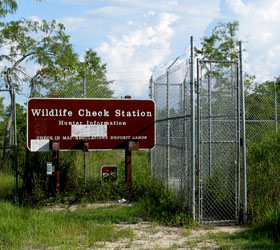 From a roadside stop, I took a trail that headed into the area. As I approached this gate, I met a local man coming out. I asked him a few questions about the area, and he seemed to be of the opinion that there weren't any alligators in the area. Then I took a closer look at the gate. If there were no 'gators around, then why the Jurrasic Park style double-locking gate in a 10 foot high cyclone fence that ran the complete length of the highway?

I decided that regardless of what he said, a high level of alertness anywhere near water (which was mostly everywhere) was in order. For all I knew, he could have been using the local wildlife to dispose of his estranged wife's body parts.

The trail actually ran along a dirt road, which must have been built for some purpose or another, becuase it ran straight back for as far as I could see. I walked back perhaps half a mile, and got to see a lot of swamp. 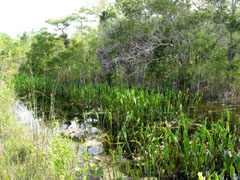 There are some places people are just not meant to live. This is one of them. In spite of that, the place has a beauty of its own. It was really very quiet, except for some bird sounds. I imagine that in the evening, the songs of frogs fill the air. 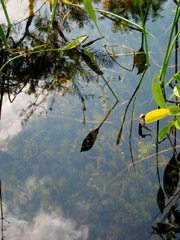 I always thought of swamps as places where the water is murky and fetid, filled with decaying debris and eminating large quantities of swamp gas. The water here was actually very clear. The picture to the left shows this well. Although the sky reflects off the surface in this shot, you can easily see the aquatic plants below the surface of the water, which was about 18 inches deep. I figured if I could see these plants, I could see an alligator. 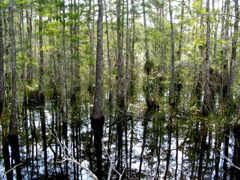 I could have spent the better part of a day walking through the area. The variety of features from one location to another was just as great as those in any other desert, mountain or forest area I have seen, except that there was very little in the way of solid ground. This, along with the nagging suspicion that this place turned into mosquito hell about dusk, made the prospect of camping in the area unappealing. 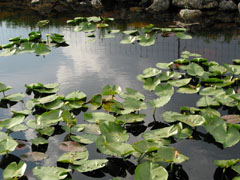 It was getting to be late afternoon, so I finished up my Swamp Adventure (now there's an idea for a theme park) and headed out. The Trooper dutifully started up - I was half way expecting it not to, and if that had happened I figured that before help could come, the mosquitos would have done such a number on me that I would need a major blood transfusion.

In the evening I finally made Miami, and spent the night in a motel south of the city on Route 1, positioned for a quick run to the Keys in the morning.