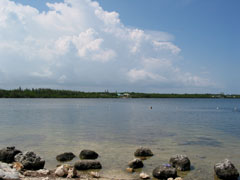 OK - finally got off the mainland into the islands. Early in the morning I left south Miami and drove to Key Largo, where my destination was John Pennycamp Coral Reef State Park. I got there without incident and set up camp. The heat and humidity were still opressive, but Pennycamp has some nice areas to swim and snorkel. 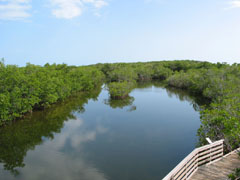 I was at Pennycamp many years ago. Back then the park was relatively new, and there wasn't a lot of vegetation. Since then, the vegetation has filled in nicely, and the forest has matured. As I checked out my campsite, I saw that there was good news and bad news. The good news was that the site was nicely shaded by trees that would protect me and my gear from the intense direct sun. The bad news was that some of those trees providing the shade were cypress and mangrove growing out of the, uh, "wetlands aquatic environment" (read mosquito plantation) at the very edge of my campsite. 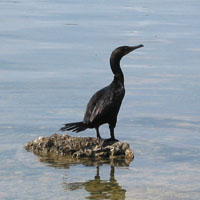 Despite the potential downsides to the campsite, I enjoy watching the local wildlife. Racoons patrol the edge of the swamp, blue-shelled crabs skittered across the road and hawks perched in the trees. 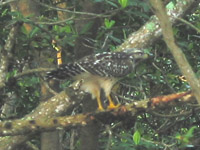 I took advantage of the beach and went for about a 1/4 mile swim. the water temperature in some shallow places was over 90 degrees and not very deep.

There were numerous nature trails in the area. In the evening I made the mistake of walking into the forested areas on one of these trails. The mosquitos seemed to wait in ambush until I was a good 100 yards into the bush, then they descended on me in a mass attack. I retreated as quickly as possible to my campsite, and to the comfort and protection of my well-screened tent.

Although I slept fairly well that night, I was awakened a couple of times by noises outside. A quick flash with my flashlight revealed at least one, and probably two, raccoons gleefully plundering the cooler belonging to the guy in the campsite next to mine. At least there were no bears to worry about.