In the morning I have various errands to run and calls to make. One of the most frustrating things I had to deal with was the fact that I was experiencing a multi-mode failure of my cell phone. Three things seemed to happen at once.

(1) - my battery charger stopped working.
(2) - the battery itself was approaching the end of its design life, so it was not longer holding a charge very well. This would have been manageable except for (1) above.
(3) - through the entire northern Utah area, the local cellular systems refused to authenticate my phone and let it into the system, even though I have a nationwide, no-roaming-charge, no-long-distance plan, in which everyone is supposed to honor my phone.

I spent over an hour on the phone trying to get (3) fixed - it never was. I bought a car-charger to fix (1), but without (3) fixed, it was academic. I searched high and low, but no-one had a battery for my phone, so (2) never got fixed either.

This little snafu once again reminded me of how much we take our technology for granted, and how much we don't appreciate the conveniences the technology provides, until the technology doesn't work. It's probably healthy to have these minor failures from time to time, not only so we do appreciate the convenience, but also to keep us capable of going back into a mode where it's not available. Anyway - once I get out of Utah I'll take care of these things. 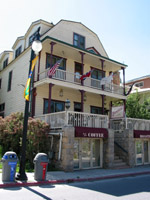 The Imperial Hotel where I stayed is one of the local historical landmarks, dating back to the beginning of the century when the town was a booming mining town. It is located on the upper end of Main Street. It is nicely appointed with comfortable furnishings - not the typical motel furniture.

Downtown Park City is "historic" in a touristy type of way, with the buidings all having that late 19th century western architectural flavor - of course, if you go back to the real old west times of the mining town, it would be different - the streets would be mud, the population would be rough, and depending on the wind direction, the air could be filled with fumes from the near-by smelters.

I had lunch with Max Paul, and he invited me out to his place in Heber Valley to have dinner with him and his wife Gail. Gail made home-made pizza, which was delicious. 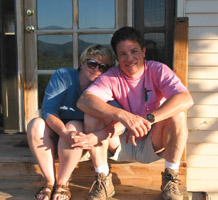 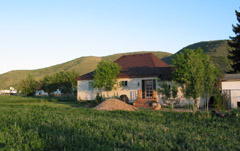 They invited me to stay that evening, but since I wanted to talk some business with Marie and her partner early the following morning, I left with the offer to stop throuh again when I came back this way and stay for a while.