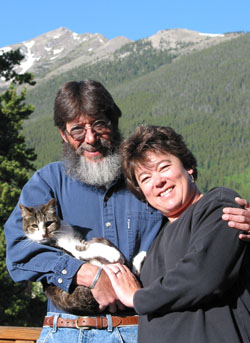 Joel and Amy are taking off for the Green River and Flaming Gorge today. I'll be cat-sitting for Buster for a day before I drive down to Evergreen to spend an evening with Jeff and Susie Peterson.

Here's Joel and Amy on their back balcony with Buster, their 17 year old cat. Buster was a little skittish when I first showed up, but after I treated him to a few little pieces of smoked salmon, he decided that I was really OK. So, I got my cat fix.

I must admit that it made me miss my own three cats, Sandy, Smokey and Cricket (Daisy passed away Valentine's Day - that's another story). The critters are temorarily (I hope) living on my brother's farm in Pennsylvania. Hopefully I'll get to visit them this coming weekend while I'm on my side jaunt to that part of the country.

In the early evening I drive down to Evergreen to spend the night with Susie and Jeff. As I drive up their driveway, Susie calls me from her garden. I walk up to the garden, and in the adjacent plot of land, a red fox walks casually through. As it turns out, the fox is probably looking for golf balls. Jeff hits balls up there, the fox finds them, picks them up and carries them away. Evidently, the fox thinks their eggs.

The fox's seeming indifference to humans close by is amazing enough. Then things get really interesting. One of Jeff and Suzie's cats trots up behind the fox, and they briefly engage in some playful interaction. Evidently this is a common activity here. I wish I had my camera handy while this is happening, it would make for some great pictures, but alas, it's in the truck, and this little interlude comes and goes before I can retrieve it. You'll just have to believe me.

It has been about 6 or 7 years since I've been here. They have added a new studio for Susie's painting. The kids have gotten big. Dane is 16 and driving, with an actually moderate level of tattoos and body piercing. Cheyenne is 14 and nowhere to be found (typical teeanage girl's trick of spending as little time as possible in the same county as your parents).