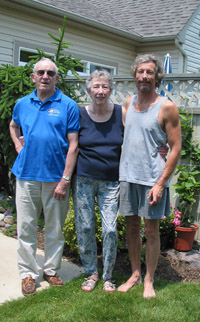 This was the last day on this trip back to Pennsylvania. I just visited with my parents for a while. In the afternoon they dropped me off at the train station and I took the train back to the airport. The flight out of Philadelphia was delayed due to thunderstorms, and didn't take off until about 8:45 (over an hour and a half late).

Fortunately the flight I was connecting to in Chicago-Midway was also delayed, so both me and my baggage made the flight. I finally got into Denver about 2:15 in the morning, a little tired, but still ready to go. The bottle of Grey Goose was still intact, stowed in the middle of my suitcase.

The air in Denver was hazy with smoke from the Hayman fire, which had defied several attempts at containment and had grown to 130,000 acres. The moon was orange from the smoke in the air. When I got to my car at the offsite lot where I had left it, there was a thin layer of ash on the windshield.

I finally got on the road at about 3:30 in the morning, heading east towards the morning sunrise which was still about an hour and a half from revealing itself.