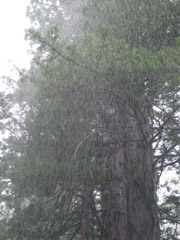 The coastal redwood area is in every respect a rain forest, as are the other rain forests that I have been to in Central America and Southeast Asia. The temperatures may be cooler, there might not be crocodiles or tigers, but they are at least as biologically productive, just as wet, and just as threatened.

The huge trees support many forms of epiphytic growth - that is, other plants that grow on the bark and branches of the trees. Moss covers everything. There is not a single spot of ground uncovered by a carpet of green. 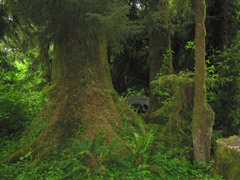 The sense one gets when walking or sitting in the forest is that of a prehistoric environment. Indeed, it is prehistoric, since Redwoods date back millions of years. Even though my campsite was within the designated park area for camping, with a road, a bear box and a table, I could walk 15 feet into the foliage and not even see signs of human development. Can you spot my tent in the picture to the right?

This morning I broke camp as quickly as possible so I could hike one of the many forest trails in the area. The trails themselves are well developed. If they were not, passage through the area would have been difficult - and very wet. Also, it would be incredibly easy to get lost.

Even though the trails were developed, they were covered with the sheddings of the trees - a combination of neddles, bark and wood - which muffles your footsteps. It was so quiet and peaceful. Other than the birds, the only sound you heard consistently was that of running streams, the drips of moisture being shed from the canopy as it hit the lower leaves, and periodically the white-noise rush of rain as it came and went at random intervals. 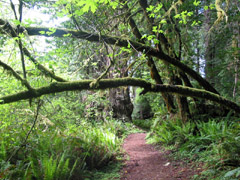 I hiked a little over 4 miles in the morning - very little vertical climbing, unlike Yosemite - which made for an easy hike and a relaxing experience.

I saw several deer at the trailhead (I had seen elk the evening before a few miles up the road). Like the deer in Yosemite, they had little fear of humans. Their radius of comfort seemed to be 15 or 20 feet - that's the closest you could get before they'd start to wander off.

So far I have not seen a bear. I suspect I will see my first bear when I am camped at a place the does note provide bear-boxes for food storage.

After my morning hike, I hit the road going north in the direction of Crater Lake. I didn't make it quite that far, so I found a cheap ($25) motel in Medford, Oregon. It wasn't exactly the Four Seasons, but it was warm and dry. The worst part was that the phone system here was one of those specialized PBX type systems, so my laptop modem wouldn't work. So, it will be a few days before I get this episode out.

It would have been nice to be able to check email, though. Maybe the local library will let me hook into their network tomorrow morning.