Start: Medford, OR
Finish: Eugene, OR

(sigh...) Snow. Again. This is the view of Crater Lake, looking pretty much straight north. The caldera is 5 miles wide. The lake at its deepest point is almost 2000 feet deep. The water looks very, very cold. One thing I noticed right away - the air was incredibly clean and clear. Visibility was easily 100 miles. I can't remember the last time I saw air this clear.

Today was much sunnier and drier than yesterday, so when I left Medford and headed in the direction of Crater Lake, I was anticipating good conditions. The road north went through lots of small towns, some of them quite attractive. I stopped in one and had a steak-and-eggs breakfast for $5.50. 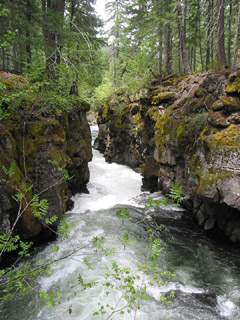 Along the way I stopped at the Rogue River Gorge. The river bed was formed in collapsed lava tubes, instead of the usual erosion process. This makes for very steep walls and dramatic rapids.

From my previous experiences with the altitudes of volcanos in the last week, I was anticipating some snow. However, the amount at Crater Lake surprised me. In some places it appeared to still be 5 or 6 feet deep. The ranger at the gate I was talking with told me it usually doesn't all melt of until July.

There is a hotel, the Crater Lake Lodge, on the rim of the caldera. I briefly considered staying there, but the cheapest room was $125 (although it was a really nice place). However, the only road open was the road up to the hotel. The caldera Rim Road was closed in all other places, the hiking trails were all closed (and under 5 feet of snow) and the campgrounds were all closed. I could have gotten a back-country pass for camping, but that would have involved packing in at least a mile, and I wasn't equipped for that - at least in these conditions. So, I stayed about an hour, enjoying the view, and then decided to head on.

I drove west, coming out of the Cascade Mountains into the lower-lying areas of Western Oregon, heading up I-5 towards Eugene. The day was mostly sunny, with occasional clouds and sprinkles, but the air remained wonderfully clear. The hillsides were covered with emerald green pastures and hardwood forest. Green Green Green - I imagine that this must be what Ireland looks like.

I found a nice, reasonable motel in Eugene and settled in for the night. Tomorrow on to Mount Saint Helens, maybe with a stop to visit the brother of a friend.