My destination for the day was Battle Ground, Washington. Steve Burinsky, the brother of my good friend Shea Stanfield, lives there. He had some idea I was coming, but not when. I didn't realize how close to him I was until I was ready to leave Eugene this morning and looked at my maps. I put in phone calls to him and his girlfriend to let him know I was coming, but seeing as how I was giving him short notice and wasn't sure he'd be getting my message, I planned actions on the assumption that I would be camping that night. 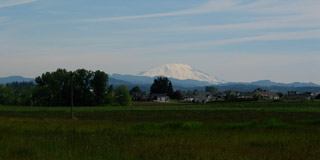 As you drive into southeastern Washington, if the sky is clear (which doesn't happen too often) Mount Saint Helens dominates the skyline, even with the top 1/3 of the mountain missing. I went through Battle Ground, which happened to be on the way to the south side of Mount Saint Helens. I stopped at the south entrance Mount Saint Helen's visitor center, and inquired about camping - camping was available, but again, roads close to the mountain were - you guessed it, still closed by snow. That was OK, because the really interesting stuff was on the other side of the mountain, where the roads were open - but about a 100 mile drive. So, I gave Steve one more call, and - Bingo - he was home. 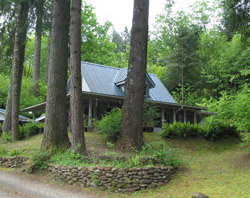 After about 30 seconds of conversation I found myself not only invited over to his cabin, but also being offered an opportunity to go to a Dave Mathews Band concert in Portland that evening. Hmm... could be more entertaining than another night of damp, cold camping.

So - I headed over to Steve's Cabin, where I hook up with him and his girlfriend Cindy, grab a quick shower, an off we go to the concert.

The concert was quite entertaining - I have been so out of touch with what's happening in music lately. The crowd varied in age from young teen to - if you can believe this - people older than me. Not surprisingly, there was the unmistakable aroma of Northern California's number one agricultural product wafting by from time to time. Some things never change.

Now, what people do in private is one thing, but in a public venue where the crowd includes whole family groups, some behavior is just plain inconsiderate. One group in the row down from us had to get up and move their kids because the people in front of them were sending clouds of smoke up into their faces.

Fer' cryin' out loud, people, make some brownies or something ...