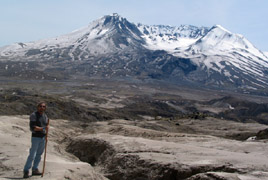 This would not have been a very good place to be standing a little over 22 years ago.

On May 18th, 1980, Mount Saint Helens erupted violently, flattening 150,000 acres (that's about 230 square miles) of forest, ejecting over a cubic kilometer of volcanic ash to altitudes, and blackening skies 3 states away. There were 57 fatalities. 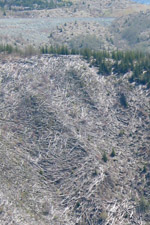 Mount Saint Helens takes some work to get to. The drive in is on good, new roads that climb from about 500' elevation at I-5 to about 4200' at the Johnston Ridge Observation Center. Just before you cross one bridge, there is a sign - "Entering Blast Zone". It's about 20 miles out from the crater.

The Johnston Ridge Observation Center is about 8 miles from the center of the crater. I started my day's hiking from there. The first mile of the trail was covered with - can you guess? yeah, more snow. In places the trail was narrow with a steep face to the upside and a steep drop-off to the downside. There were no large plants anywhere, although much of the ground was covered with moss. Blasted tree trunks, grayed by the ash and 22 years exposure to the elements, were everywhere. Whereas the forest trails of Yosemite could have been through the Forests of Middle Earth in Lord of the Rings, this landscape could easily have been in Mordor.

The slope was gentle, descending only about 800'. I was the only person down there that I could see. There was one other set of footprints, but they were going out, and looked to be about 3 days old. I hiked about 5 miles in, down into the Toutle River Valley, across vast expanses of ash deposits, to the edge of Spirit Lake.

As I approached Spirit Lake, I could here the song of many, many frogs. Later, while talking to a ranger back up at the observation center, I learned that this valley now holds the healthiest population of amphibians in the 48 contiguous states. The reason for this is that the blast wiped out most of the snakes that feed on the frogs, and frogs that were hibernating in adjacent parts of the watershed survived and migrated into the lake. Add to that the fact that prior to the erupting there were 6 lakes in the area, but the blast, mudslides and avalanches created over 100 lakes and ponds in the area. Spirit Lake is also full of trout. Steelhead trout migrated down from Saint Helens Lake, which was above the valley and not devastated by the blast. There is also a curious presence of rainbow trout. They're still trying to figure out where they came from, since there are no rainbow trout in Saint Helens Lake. The general suspicion is that some "guerilla fish stocking" was performed by parties unknown.

I could not resist taking some souvenirs. I picked up several lumps of pumice and some ash, and put them in the two ziplock sandwich bags that previously contained my lunch. The pumice and ash are both a light gray in color. In the plastic bags, I noticed that they looked, well, a little suspicious.

A scenario flashed through my mind - I'm driving through some southern state and my out-of-state plates attract the attention of some rural law-enforcement official who decides to satisfy his curiosity by pulling me over:

"So, boy, what'cha doin' in these parts?" (they still call you boy even though they're 20 years younger than you).
"Just traveling, officer." (uh huh, sounds like a subversive activity).
"Ya' got a lot of stuff back there - mind if I have a look?" (maybe there's something of value I can snag).
"Yes, I do mind." (this is going to be interesting, I can tell already).
"Oh, and why's that?" (I knew this guy looked no good - sounds like a yankee, too)
"Because you're not entitled to look." (even though Bubba here is likely to ignore it, it is the law).
"I'll tell you what I'm entitled to - stand over there while I check this out." (arguing legalities at this point is not likely    to improve things).
(Finding my MSH souvenirs) "WELL - looky here - and what exactly is THIS?" (you can see the glee as he thinks    he's got a commendable bust developing, and possibly a juicy RICO seizure).
"Volcanic ash and pumice, officer." (I'm trying not to laugh and cry at the same time).
"What? Looks like a whole bunch of crack to me." (If it was, I'd be a rich man).

Where it goes from there - who knows? Anyway - I digress...

There is something very mystical about walking for miles through a place like this with no one else around. You feel like you are the last person on the planet. It's almost as if at the end of the 10 mile trek, you came back up and found that the buildings and roads were no longer there, you wouldn't be surprised.