OK, the days are getting interesting again. I wish I could have caught more of the morning's activities in images, but I sort of had my hands full. You'll just have to use your imagination.

Fred and I went out early for coffee and a walk on the beach. As we are walking along, we notice a harbor seal struggling out of the surf and up onto the sand. This is very unusual, as the seals prefer to either remain in the water, or to climb up on a rocky surface to sun themselves, and then usually in groups. As we approach, we notice that she appears to be in some distress, and as I get closer I can see that there is something around her neck, either fishing line or netting. 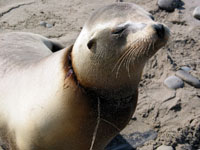 Fred calls animal control and reports the situation. They tell him that they'll be a little while, since there are a number of seals and other animals up and down the beach that appear to have been sickened by a seasonal algal bloom that is somewhat toxic. At this point I decide to run back to my truck and get a pocket knife in case she takes a turn for the worse before the pro's show up.

I get back, and we're still waiting. At one point the poor girl goes into a seizure, and we get concerned. This is not a small animal - probably about 180-200 lbs. And they have been known to bite. However, at one point she appears to be very much out of it, so Fred throws his sweatshirt over her eyes, and I manage to get in quickly but VERY cautiously to try to cut the line. It appears to have actually cut into her flesh in places. I manage to get some of it off, but not all of it. This seems to have helped, as she starts to recover and I back off. She seemed to be totally unbothered by us standing 5 feet away, but I wasn't going to give her a chance to treat my hand like a fish.

Now things get mildly surreal. Animal Control finally shows up. At the same time, strolling down the beach, comes a young couple that for all the life of me, and Fred, appear at first to be - Amish??. Naaahhh... but ... well, OK, they're probably Mennonite (Amish Lite) but he has the suspenders and straw hat - but in a stylish black, not grey or tan, and no beard - she wears a hair covering, more the Mennonite type than Amish, no makeup at all, but the real kicker was she was carrying a nice camera, and he had a cell phone on his belt. OK, definitely not Amish. Fred and I have both spent considerable time in Lancaster County, PA, so we know about these things. Anyway ...

The Animal Control guy thinks the seal needs to be transported for veterinary attention. Fred, who is a doctor, and me, who is just sort of an animal loving yahoo, concur. So you have to picture me, Fred, this Animal Control guy in uniform, and this very Amish looking guy, except for his cell phone, picking this poor animal up by her flippers and loading her into one of the kennels on the truck. Meanwhile, the lady is taking pictures of the whole thing. I wish I had given her my camera but I didn't think of that until I already had an arm full of flipper. OK, so you had to be there.